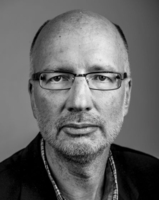 Poul Høi has since 1996 been a foreign correspondent based in the United Kingdom and the United States. He studied journalism at the Danish School of Journalism and American University in Washington D.C. and graduated with Distinction - with a MA in Military History - from the University of Birmingham. He is the author of "Bushland" (Gyldendal, 2009) and "Så læg en blomst i mit navn..." (Berlingske, 2014). In 2002, he was awarded the Cavling Prize for his coverage of the terror attack on 9/11 and its international aftermath.